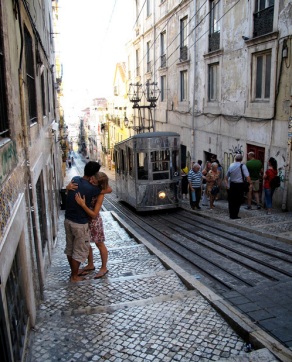 This is what I see

I wanted to write a short story based on this picture, but I lacked the courage! I noticed the couple first, then the graffiti, then wondered what the buildings were further down the street, are they shops? They certainly look inviting, whatever they are. Then I looked at the couple again, but then I looked away, as in embarrassment,  as though I was staring at something private. To me they look like they are clinging on for dear life, time has stopped, all they are aware of is each other.

I haven’t ever felt like this… not as fully anyway. Somewhere near it recently, though not the real deal, as the feelings have faded. I cannot get the picture of the couple out of my head. It was some time before I noticed the ground they were on was actually steps. They almost look pretty. I briefly wondered how long it would take me to descend them, if I passed the couple. I can’t shake the feeling of looking in on a private moment. It’s almost a PDA (Public display of affection. I HATE PDA’s, for the record.) Everyone else in the picture looks as though they are going about their business, tourists on the other side, deciding where to go, what do first. Still I cannot forget about the couple.

The picture makes me…

Looking at them makes me feel wistful. A bit wistful that I wish I had what they have, but mostly because more than one friend I considered myself close to has recently found The One and with the exception of one, haven’t seen the other for ages. They were, are, friends I relied on partly because they’re ace and I loved them to bits, partly because they were sympathetic to my semi-housebound state and would visit gladly, and often.I’m having to readjust my feelings, make other friends, find other ways of coping. Does that mean I relied on them too much? This doesn’t necessarily mean I am lonely, it just means I miss them, LOADS. When I wrote about my friends last year, two of them were most definitely in that group. Don’t get me wrong, I am happy for them, I absolutely am. Which I why i am leaving them all alone for the most part, to get on with it, and missing them from a distance. Sometimes, I leave a voice-mail, and sometimes I suggest meeting. Mostly, it doesn’t help with missing them, but hoping this feeling will fade. Of course, I’m also hoping it’s my turn one day, as I wrote in an earlier post. For now, I will let the people in this picture get on with their day, and I will go back to mine, leaving the couple in the picture to enjoy their embrace in peace.

p.s. It also makes me want a holiday somewhere in Western Europe. Definitely time to go back to my day!

This post is in answer to the ‘Weekly Writing Challenge’. If this picture inspires you, why not write your own post, I’d love to read it!

2 thoughts on “hanging on for dear life…”

Back to top
crippledscholar
The Autism Diaries

The rollercoaster ride of parenting an autistic child in a very neurotypical world.

a journey within a state of grace

A pause to think about life, faith and parenting.

To Grasp A Little More Than Before

Cuilverse: Shadow in the Mirror

A disabled insomniac who crafts!!!!